Skip to content
Java EE 1.6 has been officially last December. Now we are pleased to learn that the release 6 M2 of JBoss application server, finally includes also some EJB 3.1 stuff.
In a previous article we have added a preview to the EJB 3.1 technology. Now you can play with some cool features which are included in the release 6.0.0 M2 of the application server.

EJB Interfaces are no longer needed. You need just to add a @Stateless or @Stateful annotation and that’s all. This avoid the burden of replicating some/all methods from the Bean class to the interface view.
Here’s an example:
When you deploy this EJB, the container recognizes that is a no-interface bean and creates a Local interface automatically for you. 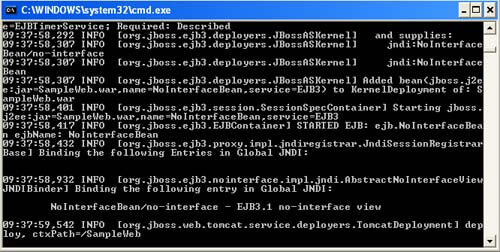 This of course means that if you need to expose your bean with remote interface, you need to provide another Bean which acts as Session Facade to your no-interface EJB.
As a consequence of this, the use case for no-interface EJB are mainly for application which are fronted by the Web tier, which in turn communicates with the EJB (local) tier.

The most interesting news of this new release is the ability to deploy your EJB along with your Web application. This means that :
The following Servlet has our no-interface Bean injected and deployed in the same Web Archive:
Notice how little coding we have saved from earlier EJB specifications! ( No interfaces needed, no Service Locator class, no need to create separate archives for application…)

You can pack your EJBs in two ways:
1) Simply add the EJBs in the classes folder, like a normal Bean/Servlet:

2) Pack your EJB classes in an archive and include it in the WEB-INF/lib folder:

That’s all for now. As soon as the EJB 3.1 specification will be full implemented, we will add new articles so stay tuned!