What is a rule engine ?

A rule engine is a piece of software that executes rules according to some algorithm. A rule engine combines a set of facts that are inserted in to the system with its own Rule Set to reach a conclusion of triggering one or several actions. These rules typically describe in a declarative manner the business logic which needs to be implemented in our environment (which we assume rarely changes). The facts, on the other had, describe the conditions of the system that is to be operated on; they may change frequently.

Logic, or rules in our case, are pieces of knowledge often expressed as, “When some conditions are evaluated to true, then do some tasks“.

A system with a large number of rules and facts may result in many rules being true for the same facts; in this case, we say that rules are said to be in conflict. A rule engine can use different conflict resolver strategies to determine the order of execution of the conflict rules.  In a rule engine, there are two execution methods:

What is the difference between a Rule engine and a process?

A rule differs from a process mainly because: 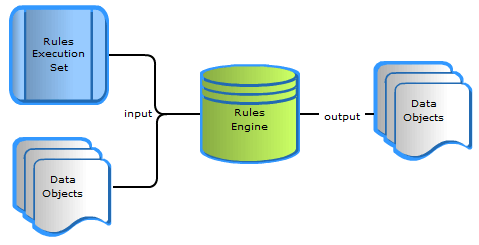 Rules are stored in a forward-chaining rule engine, i.e. the engine implements an execution cycle that allows the action of one rule to cause the condition of other rules to become met. In this way, a cascade of rules may become activated and each rule action executed. Forward-chaining rule engines are suitable for problems that require drawing higher-level conclusions from simple input facts.

So, here’s how you could rewrite the above check as a rule:

As you can see, a Rule file is based on two basic concepts:
Rules: declarative statements that govern the conduct of business processes. A rule consists of a condition and actions. The condition is evaluated, and if it evaluates to true, the rule engine initiates one or more actions.

Facts: are the data upon which rules operate. In our example, the available money are facts.

Turning to rules adds a set of advantages to your applications:

Greater flexibility: keeping your rules into a Knowledge base let you adapt easily your decisions when they are changing.

Easier to grasp: Rules are easier to understand than procedural code so they can be effectively used to bridge the gap between business analyst and developers.

Reduced complexity: When embedding lots of decision points to your procedural codes it can easily turn your application into a nightmare. On the other hand rules can handle much better increasing complexity because they use a consistent representation of business rules.

Reusability: By keeping rules are kept in one place leads to a greater reusability of your business rules. Also, traditional procedural code often impose unnecessary variations of base rules which are therefore more difficult to reuse in other contexts.

On the other hand, using a rule engine might prove to be unnecessary if your business logic is static and the number of business rules are pretty simple and limited in number.

The following picture, summarizes the concept:

The Drools engine in turn is part of the KIE (Knowledge Is Everything) umbrella project which includes, besides Drools also:

As an example of Drool Rule, consider the following Java Bean model and sample DRL rule:

And here is a sample DRL rule for to check the Applicant model:

The “Is of valid age” rule disqualifies any applicant younger than 18 years old.

The major advantages of using OpenL Tablets are as follows:

For access to rules and data in Excel tables, OpenL Tablets API is used. OpenL Tablets provides a wrapper to facilitate easier usage.

For example consider the following rule coded in an Excel document:

There is only one rule hello1:

Here is the wrapper which runs the rule::

In order to use OpenL Tablets, the following dependency needs to be included:

In a nutshell, Easy Rules provides the Rule abstraction to create rules with conditions and actions, and the RulesEngine API that runs through a set of rules to evaluate conditions and execute actions.

To use Easy Rules, you have to add the following dependency to your pom.xml :

We will create a rule that is always triggered and that will print “hello world” to the console when executed. Here is the rule:

Now let’s create a rules engine and fire this rule:

Tired of classes filled with if/then/else statements? Need a nice abstraction that allows rules to be easily specified in a way that decouples them from each other? Want to write rules the same way that you write the rest of your code? RuleBook just might be the rules abstraction you’ve been waiting for!

Rule book is a rule engine built to create rules in a way familiar to Java developers. RuleBook also allows you to specify rules using an easy to use Lambda enabled Domain Specific Language or using POJOs that you define!

To build projects with RuleBook, add the code below to your pom.xml

Here is an example:

You can run the ExampleRule as follows: