Blue-green deployments are a proven approach to reduce the downtime caused when you are typically upgrading an environment. This is done by creating a parallel environment on which the new deployment can be installed while keeping your earlier version still running. If a problem is detected, and after the new deployment is verified, traffic can be switched over with the option to rollback. 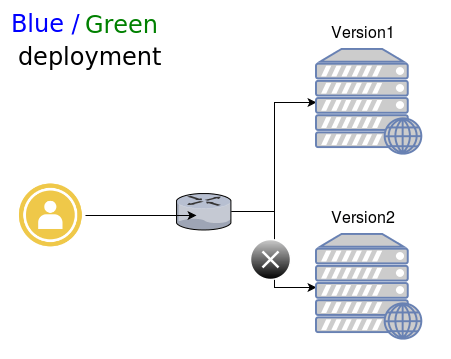 Let’s see in concrete a simple demo application running on WildFly 10, which is made up of two versions: the master branch and a new branch, named version2, which will be triggered.

From any available project execute the following command to create the first app named bluedeploy:

Now let’s create the second app based on the version2

Let’s check that our Pods are done:

Ok now we will expose on the router the first service, named “bluedeploy” which is related to the application running on the master branch:

The following route will be created:

Now let’s try to invoke our application which is running in the “demo” Web context:

So the index.jsp returned the landing page for the application in the master branch. Now you can use the “oc patch” command to vary the settings of your router so that it will switch to the “greendeploy” app:

You should expect the route to be changed accordingly:

Let’s check that we are serving the application in the other branch:

Great. So with little work we were able to handle a replacement between applications without an interruption of the service. In the next tutorial How to configure AB Deployments on Openshift we will learn another approach called AB deployments that can be used to spread the traffic between two applications.