This is a two part tutorial which contains a large collection of Performance tuning tips for JBoss Application Server.

One strength of the J2SE platform is that it shields the developer from the complexity of memory allocation. However, once garbage collection is the principal bottleneck, it is worth understanding some aspects of this hidden implementation

An object is considered garbage when it can no longer be reached from any pointer in the running program. The most straightforward garbage collection algorithms simply iterate over every reachable object. Any objects left over are then considered garbage. The time this approach takes is proportional to the number of live objects,
The complete address space reserved for object memory can be divided into the young and tenured generations.

A third generation closely related to the tenured generation is the permanent generation which holds data needed by the virtual machine to describe objects that do not have an equivalence at the Java language level. For example objects describing classes and methods are stored in the permanent generation
Use the the command line option -verbose:gc causes information about the heap and garbage collection to be printed at each collection. For example, here is output from a large server application: 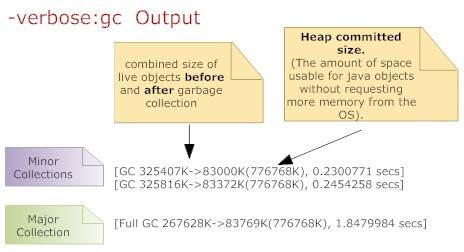 It’s demonstrated that an application that spends 10% of its time in garbage collection can lose 75% of its throughput when scaled out to 32 processors
(http://java.sun.com/javase/technologies/hotspot/gc/gc_tuning_6.html)

The server JVM is better suited to longer running applications. To enable it simply set the -server option on the command line.

The RMI system provides a reference counting distributed garbage collection algorithm. This system works by having the server keep track of which clients have requested access to remote objects running on the server. When a reference is made, the server marks the object as “dirty” and when a client drops the reference, it is marked as being “clean.”. However this system is quite expensive and by default runs every minute.

Set it to run every 30 minute at least

JBoss tuning tip 7: Don’t use Huge heaps, use a cluster

More JVMs/smaller heaps can outperform fewer JVMs/Larger Heaps. So instead of huge heaps, use additional server nodes. Set up a JBoss cluster and balance work between nodes.

JBoss tuning tip 8: Don’t choose an heap larger then 70% of your OS memory

Choose a maximum heap size not more then 70% of the memory to avoid excessive page faults and thrashing.

This is one of most important tuning factor: the heap ratio. The heap ratio specifies how the amount of the total heap will be partitioned between the young and the tenured space.  What happens if you have lots of long lived data (cached data, collections ) ? maybe you’re in this situation: 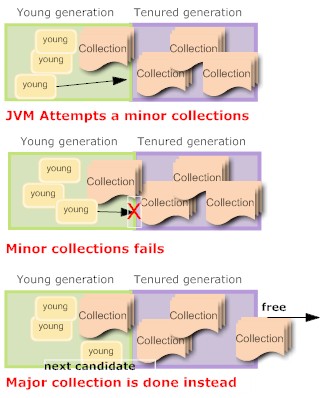 NewRatio is a flag that specifies the amount of the total heap that will be partitioned into the young generation. It’s the tenured-generation-size / young-generation-size. For example, setting -XX:NewRatio=3 means that the ratio between the young and tenured generation is 1:3

What is the recommeded heap ratios ? Set the tenured generation to be approximately two times the size of the young generation.
This recommendation is only a starting point, you have to tune from there and to do that you have to gather and analyze the garbage collection statistics.

Check out our Monitoring Tips.

Each operating system sets default tuning parameters differently. For Windows platforms, the default settings are usually sufficient. However, the UNIX and Linux operating systems usually need to be tuned appropriately

If your console shows 1024, it is insufficient. Please add the following lines to your /etc/security/limits.conf file and reboot your machine:

Use sysctl -p command or reboot your node for the changes to take effect.

The TCP maximum transfer unit is 1512 on the Internet. If you are sending larger packets it’s a good idea to increase MTU size in order to reduce packet fragmentation (especially if you have a slow network):

Applications using Java native memory (such as java.nio API) may tune application performance and memory use by adjusting the MALLOC_ARENA_MAX environment variable.
Java native memory is managed by the glibc library which uses multiple memory pools that malloc can allocate memory from. Especially for threaded programs, using multiple memory pools can speed up memory allocation (be reducing locking) and improve overall performance.
With some memory allocation patterns, this performance improvement can come at the cost of somewhat greater app memory consumption. This may especially be the case for programs that create and destroy many threads and allocate lots of memory in those threads.
If your application has MALLOC_ARENA_MAX=2 set but has plenty of memory to spare, you may be able to see small gains in response time by increasing this value.

Here’s how to do it (2GB Heap Size Example):

Check the following TCP parameters with your sysadmin:

Each socket connection to JBoss consumes a file descriptor. To optimize socket performance, you may need to configure your operating system to have the appropriate number of file descriptors.

See Solaris documentation about this parameters:

For most applications this defaults will just work well, however if you are running an application with issues lots of requests to jboss (such as EJB invocations) then monitor your thread pool. Open the Web Console and look for the MBean jboss.system:service=ThreadPool. 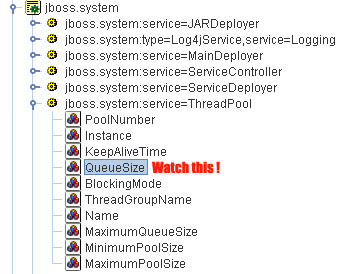 Watchout! Speak at first with your sysadmin and ensure that the CPU capacity support the increase in threads.

Watchout! if your threads make use of JDBC connections you’ll probably need to increase also the JDBC connection pool accordingly. Also verify that your HTTP connector is enabled to handle that amount of requests.

JBoss supports connectors for http, https, and ajp. The configuration file is server.xml and it’s deployed in the root of JBoss web container (In JBoss 4.2.0 it’s:  “JBOSS_HOME\server\default\deploy\jboss-web.deployer”)

The underlying HTTP connector of JBoss needs to be fine tuned for production settings.  The important parameters are:

maxThreads – This indicates the maximum number of threads to be allocated for handling client HTTP requests. This figure corresponds to the concurrent users that are going to access the application. Depending on the machine configuration, there is a physical limit beyond which you will need to do clustering.

acceptCount – This is the number of request threads that are put in request queue when all available threads are used. When this exceeds, client machines get a request timeout response.

compression – If you set this attribute to “force”, the content will be compressed by JBoss and will be send to browser. Browser will extract it and display the page on screen. Enabling compression can substantially reduce bandwidth requirements of your application.

So how do you know if it’s necessary to raise your maxThreads number ? again open the web console and look for the MBean jboss.web:name=http-127.0.0.1-8080,type=ThreadPool. The key attribute is currentThreadsBusy. If it’s about 70-80% of the the maxThreads you should consider raising the number of maxThreads. 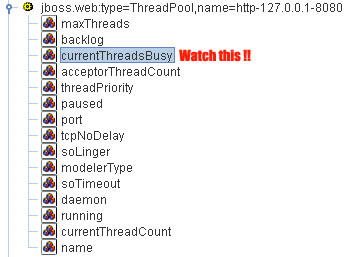 Watch out! if you increase the maxThreads count you need to raise your JBoss Thread pool accordingly.

JBoss application server regularly checks whether a JSP requires compilation to a servlet before executing a JSP. In a production server, JSP files won’t change and hence you can configure the settings for increased performance.

Open the web.xml in deploy/jboss-web.deployer/conf folder. Look for the jsp servlet in the file and modify the following XML fragment as given below: 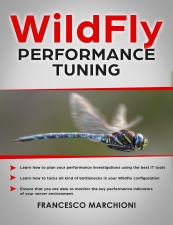 Speed-up your Enterprise Applications with our WildFly Performance Tuning guide!