This is an introduction tutorial to the newest JBoss AS 7 which appeared in the download section for the first time in Nov 2010. This tutorial has been recentely updated to reflect the changes introduced in the 7.1.0 Beta release of the application server. Keep on reading to learn more about AS 7 !

JBoss application server can be freely downloaded from the community site: http://www.jboss.org/jbossas/downloads/
JBoss AS 7 does not come with an installer; it is simply a matter of extracting the compressed archive.

If you need to customize the startup properties of your application server, then you need to open the standalone.conf (or standalone.conf.bat for the Windows users) where the memory requirements of JBoss are declared. Here’s the Linux
core section of it:

So, by default, the application server starts with a minimum memory requirement of 64MB of heap space and a maximum of 512MB. This will be just enough to get started, however, if you need to run a core Java EE application on it, you will likely require at least 1GB of heap space or 2GB or more depending on your application type. Generally speaking, 32-bit machines cannot execute a process whose space exceeds 2GB, however on 64 bit machines, there’s essentially no limit to process size.

You can verify that the server is reachable from the network by simply pointing your browser to the application server’s welcome page, which is reachable by default at the well-known address: http://localhost:8080

Connecting to the server with the command line interface

If you have been using previous releases of the application server you might have heard about the twiddle command -line utility that queried the MBeans installed on the application server. This utility has been replaced by a more sophisticated interface named the Command Line Interface (CLI), which can be found in the JBOSS_HOME/bin folder.

Just launch the jboss-cli.bat script (or jboss-admin.sh for Linux users) and you will be able to manage the application server via a shell interface. Now issue the connect [Ipaddress:port] command to connect to the management interface:

Connecting to a remote host

Starting from the 7.1.0 release there is security enabled by default on the AS 7.1 distribution for remote clients. Thus management interfaces are secured by default to prevent unauthorized remote access whilst still allowing access for local users for an easier out of the box experience.

If you are connecting to a remote host controller, then you need to provide your credentials:

Check this tutorial to see how to create new management users with JBoss AS 7.

Probably the easiest way to stop JBoss is by sending an interrupt signal with Ctrl+C.
However, if your JBoss process was launched in the background or rather is running on another machine (see next), then you can use the CLI interface to issue an immediate shutdown command:

There is actually one more option to shutdown the application server, which is pretty useful if you need to shut down the server from within a script. This option consists of passing the –connect option to the admin shell, thereby switching off the interactive mode:

The command-line Interface contains a lot of useful commands. One of the most interesting options is the ability to reload all or parts of the AS confi guration using the reload command . When issued on the root node path of the AS server, it is able to reload the services configuration:

The first thing you’ll notice when you browse through the application server folders is that its file system is basically divided into two core parts: the dichotomy reflects the distinction between standalone servers and domain servers. 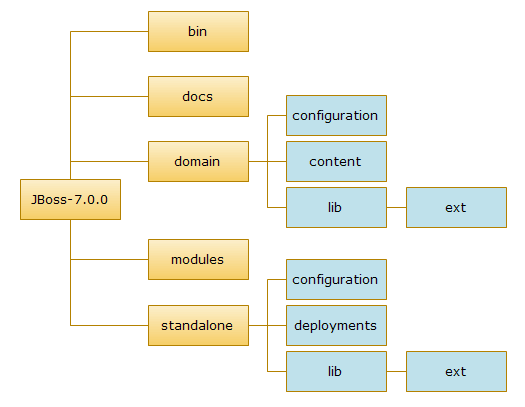 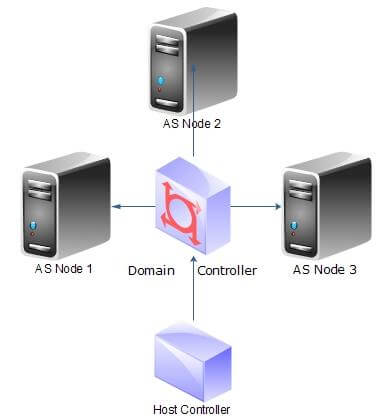 JBoss AS 7 running in domain mode

In order to launch JBoss AS 7 in domain mode run the domain.sh/domain.cmd script from the bin folder.

Deploying applications on JBoss AS 7

Applications are deployed differentely depending on the type of server. If you are deploying to a domain of servers then you need the Command Line Interface because the application server needs to be informed on which server group/s  the deployment is targeted.

Ex. Deploy an application on all server groups:

Ex. Deploy an application on one or more server groups (separated by a comma):

If you are deploying to a standalone server then you can either use the CLI or drop the deployment unit into the server deployments folder.

The deployments folder is the location in which users can place their deployment content (for example, WAR, EAR, JAR, SAR fi les) to have it automatically deployed into the server runtime. Users, particularly those running production systems, are encouraged to use the JBoss AS management APIs to upload and deploy deployment content instead of relying on the deployment scanner subsystem that periodically
scans this directory