The first mandatory requirement is to install a JDK 1.6/JDK 1.7 environment. The Java SE download site can be located at http://www.oracle.com/technetwork/java/javase/downloads/index.html.

Choose to download either Java SE 6 or Java SE 7, and install it. If you don’t know how to install it, please take a look at the following link: http://docs.oracle.com/javase/7/docs/webnotes/install/index.html

Once you have completed your installation, run java -version to verify that it is correctly installed:

As you can see from the following picture, the latest stable release is the 7.1.1 (Brontes), which features a Certified Java EE 6 Full Profile:

Once you have chosen the appropriate server distribution, you will be then warned that this download is part of a community release and, as such, it is not supported.

Installing JBoss AS is a piece of cake: it does not require anything else besides unpacking the archive jboss-as-7.1.1.Final.zip.

Windows users can simply use any uncompress utility, such as WinZip, or WinRAR taking care to choose a folder, which doesn’t contain empty spaces. Unix /Linux should use the unzip shell command to explode the archive:

Security Warning: Unix/Linux users should be aware that JBoss AS does not require root privileges as none of the default ports used by JBoss are below the privileged port range of 1024. To reduce the risk of users gaining root privileges through the JBoss AS, install and run JBoss as a non-root user.

Starting up JBoss AS 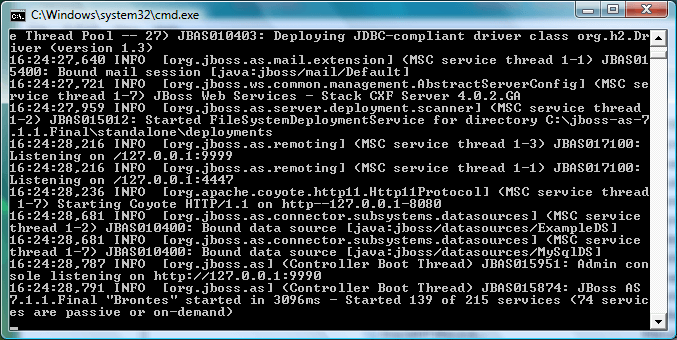 If you need to customize the startup properties of your application server, then you need to open the standalone.conf (or standalone.conf.bat for the Windows users) where the memory requirements of JBoss are declared. Here’s the Linux core section of it:

So, by default, the application server starts with a minimum memory requirement of 64MB of heap space and a maximum of 512MB. This will be just enough to get started, however, if you need to run core Java EE applications on it, you will likely require at least 1 GB of heap space up to 2 GB or more depending on your application type. Generally speaking, 32-bit machines cannot execute a process whose space exceeds 2GB, however on 64 bit machines, there’s essentially no limit to process size.

You can verify that the server is reachable from the network by simply pointing your browser to the application server’s welcome page, which is reachable by default at the well-known address: http://localhost:8080.