From Drools to Kogito Rule Engine

You might have already heard of Kogito so you may want to learn more about it and how it compares with Drools Rule engine. In this tutorial we will learn what is the relation between these two Rule engines.

The Kogito project aims to bring the business automation suite to the cloud and precisely into the Kubernetes ecosystem. At the same time, Kogito does not attempt to replace Drools, but to bring it further. Drools is a fantastic high-performance, feature-rich open source rule engine and it has been used to create rule-based artificial intelligence. Kogito aims to use Drools core features but bring the following improvements:

This model is quite powerful and simple at the same time: as a rule author, you can rely upon the rules you have written to realize complex flows of reasoning, without worrying about how and when they will trigger. It however lacks of a complex execution model: there is no proper notion of a module hence you cannot perfectly isolate one rule from another, or to properly partition the working memory. As the rule base increases in complexity, it will become harder and harder to understand which rules trigger and why.

Kogito introduces the concept of Rule unit, which is a module for rules and a unit of execution. A rule unit collects a set of rules with the declaration of the type of facts that the rules act on. A rule unit also serves as a unique namespace for each group of rules. A single rule base can contain multiple rule units.

You interact with the rule unit through the Data sources it exposes. Data sources are typed sources of data that rule units can subscribe to for updates.

For example, the following is a basic example of DataStream Data source which appends a new values and notify all active subscribers:

One key feature of Kogito is ist ability to use the Java-based declaration of a rule unit to automatically map it with the signature of a REST endpoint. POSTing to the endpoint implies instantiating the unit, inserting data into the data sources, firing rules, returning the response payload. The response is computed using a user-provided query. For instance, consider this example from Drools examples:

When you include the above Rule unit in a Kogito project, a REST Endpoint will be automatically created for you to invoke each Rule with the right typed Parameters. Further more, as you can plug Swagger UI interface on the top of it, you already have an UI to test your Rules: 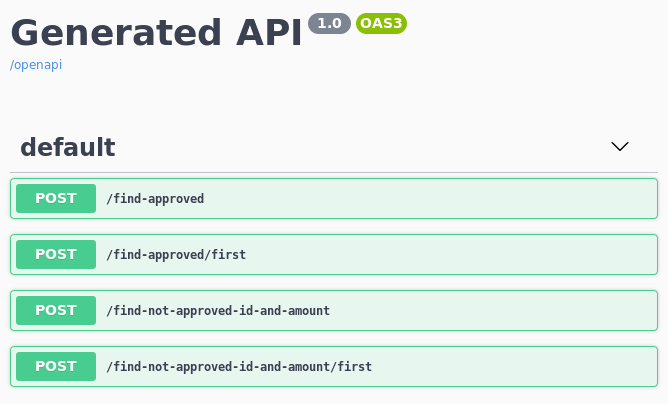 This was a brief introducion on how Kogito can bring further the capabilities of Drools engine. In the next tutorial we will show all the steps required to create a RESTful application by just designing Rules with the editor and adding them in a Kogito project.

Getting started with Kogito Business Automation

Kogito is an advanced business automation toolkit that derives fr