Windup is a a rule-based migration tool which can be used to simply the migration from other major application servers (Weblogic and Websphere) to JBoss EAP/WildFly and to upgrade existing server installations to newer releases. You can run Windup either against the source code of the application or the compiled archive.

Windup builds a data model based on the rule execution results and stores component data and relationships in a graph database, which can then be queried and updated as needed by the migration rules and for reporting purposes. In the end, HTML reports will be produced that will assist you in the assessment of your migration plan.

Getting started with Windup:

Start by downloading Windup from http://windup.jboss.org/download.html . Next navigate to the _WINDUP_HOME/bin_ directory.

Execute the windup script and specify the appropriate arguments. For example, if you were supposed to check the demo application provided by the windup team, then you would execute the following command:

TIP: Windup is able to generate its reports out of a packaged application. You can, however, also use the *–sourceMode* argument to run Windup against application source code.

You will see the list of artifacts that have been migrated from the following picture: 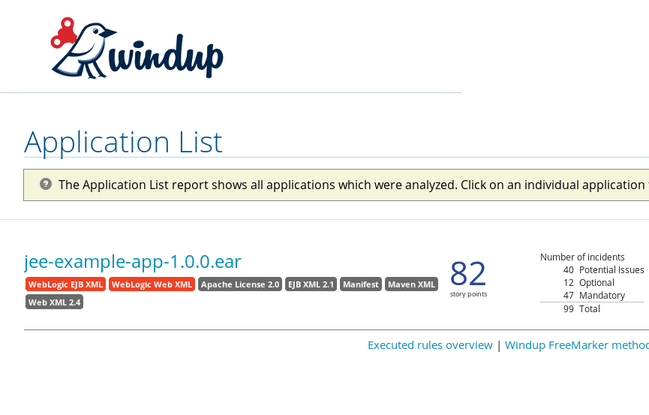 Click on it and you will be redirected to the *Report Index* which provides summary information about findings from the migration analysis, as well as links to additional reports with detailed information. 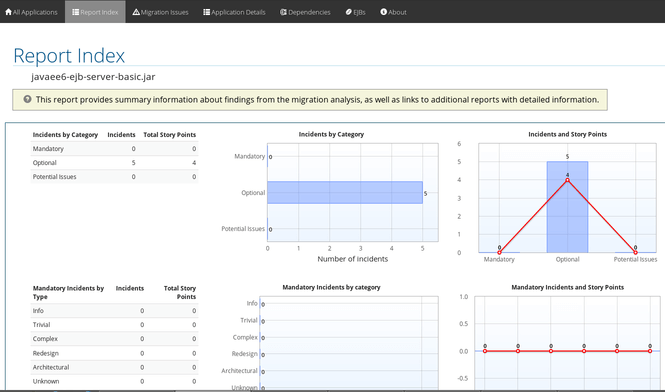 This is the list of Report sections which will be available (depending on the content of your application):

For example, as the demo application is a Weblogic based application, you will see a large list of migration steps which need to be analyzed with concrete suggestions and an evaluation of the complexity of the migration: 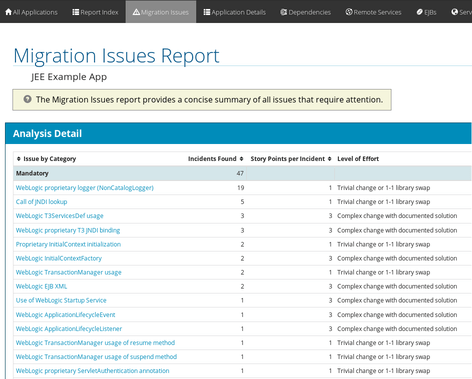 Windup is not worth using just for migration from other application servers but you can use it as well to upgrade to newer versions of JBoss/WildFly. For example, if you were to migrate an application from JBoss EAP 6 to JBoss EAP 7, then you can use the target [Server]:[Release] option.

As you can see from the migration report, in this case, most of the effort in this application will be adapting the Clustering policies, by removing the *@Clustered* annotation which has been deprecated in EAP 7: 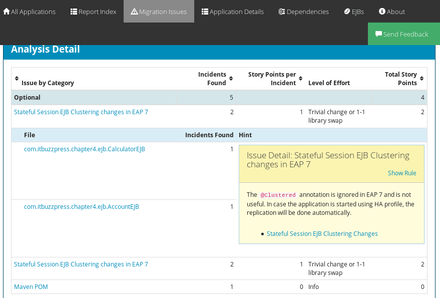 Restricting the migration to a set of packages

Creating Maven projects out of a compiled artifact

Windup is not just about migration but it is a great source of hacks. For example, you can create a full Maven project from a compiled project. This is a great option if you need a project starting point with all the necessary dependencies and APIs for your application. In order to do that, simply add the *–mavenize* flag to the windup shell, as in the following example:

As you can see, the following resources have been automatically created:

.A Bill of Materials (BOM) file. The purpose of this BOM is to have the versions of third-party dependencies used by the project defined in one place.

This tutorial is an extract from JBoss.org Hacks book available here: http://www.itbuzzpress.com/ebooks/jboss-org-hacks.html