There are over 70 Java-based open source machine learning projects listed on the MLOSS.org website, and probably many more unlisted projects live at university servers, GitHub, or Bitbucket. In this article, we will review the major libraries and platforms, the kind of problems they can solve, the algorithms they support, and the kind of data they can work with.

Waikato Environment for Knowledge Analysis (WEKA) is a machine learning library that was developed at the University of Waikato, New Zealand, and is probably the most well-known Java library. It is a general purpose library that is able to solve a wide variety of machine learning tasks, such as classification, regression, and clustering. It features a rich graphical user interface, command-line interface, and Java API. You can check out Weka at http://www.cs.waikato.ac.nz/ml/weka/. 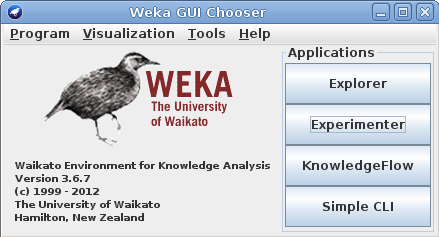 Currently, Weka contains 267 algorithms in total: data preprocessing (82), attribute selection (33), classification and regression (133), clustering (12), and association rules mining (7). Graphical interfaces are well suited for exploring your data, while the Java API allows you to develop new machine learning schemes and use the algorithms in your applications.

Weka is distributed under the GNU General Public License (GNU GPL), which means that you can copy, distribute, and modify it as long as you track changes in source files and keep it under GNU GPL. You can even distribute it commercially, but you must disclose the source code or obtain a commercial license.

In addition to several supported file formats, Weka features its own default data format, ARFF, to describe data by attribute-data pairs. It consists of two parts. The first part contains a header, which specifies all of the attributes and their types, for instance, nominal, numeric, date, and string. The second part contains the data, where each line corresponds to an instance. The last attribute in the header is implicitly considered the target variable and missing data is marked with a question mark. Consider the following example:

Weka’s Java API is organized into the following top-level packages:

The Java Machine Learning Library (Java-ML) is a collection of machine learning algorithms with a common interface for algorithms of the same type. It only features the Java API, and so it is primarily aimed at software engineers and programmers. Java-ML contains algorithms for data preprocessing, feature selection, classification, and clustering. In addition, it features several Weka bridges to access Weka’s algorithms directly through the Java-ML API. It can be downloaded from http://java-ml.sourceforge.net.

Java-ML is also a general-purpose machine learning library. Compared to Weka, it offers more consistent interfaces and implementations of recent algorithms that are not present in other packages, such as an extensive set of state-of-the-art similarity measures and feature-selection techniques, for example, dynamic time warping (DTW), random forest attribute evaluation, and so on. Java-ML is also available under the GNU GPL license.

Java-ML supports all types of files as long as they contain one data sample per line and the features are separated by a symbol such as a comma, semicolon, or tab. The library is organized around the following top-level packages:

The Apache Mahout project aims to build a scalable machine learning library. It is built atop scalable, distributed architectures, such as Hadoop, using the MapReduce paradigm, which is an approach for processing and generating large datasets with a parallel, distributed algorithm using a cluster of servers.

Mahout features a console interface and the Java API as scalable algorithms for clustering, classification, and collaborative filtering. It is able to solve three business problems: 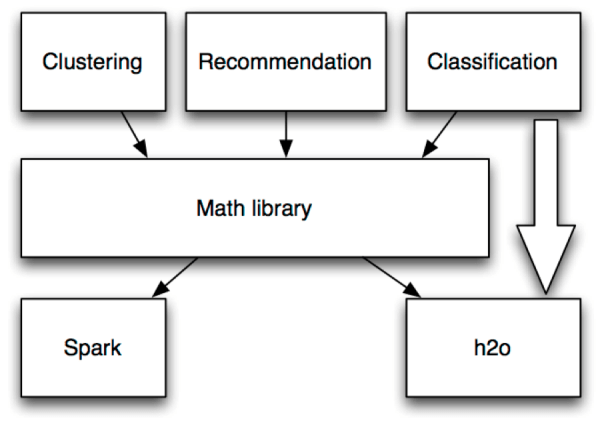 Apache Spark, or simply Spark, is a platform for large-scale data processing builds atop Hadoop, but, in contrast to Mahout, it is not tied to the MapReduce paradigm. Instead, it uses in-memory caches to extract a working set of data, process it, and repeat the query. This is reported to be up to ten times as fast as a Mahout implementation that works directly with data stored in the disk. It can be grabbed from https://spark.apache.org.

Spark’s MLlib can use a Hadoop-based data source, for example, Hadoop Distributed File System (HDFS) or HBase, as well as local files. The supported data types include the following:

Labelled point is used for supervised learning algorithms and consists of a local vector labelled with double-typed class values. The label can be a class index, binary outcome, or a list of multiple class indices (multiclass classification). For example, a labelled dense vector is presented as [1.0, (2.0, 0.0, 1.0, 0.0)].

Local matrices store a dense matrix on a single machine. It is defined by matrix dimensions and a single double-array arranged in a column-major order.

Distributed matrices operate on data stored in Spark’s Resilient Distributed Dataset (RDD), which represents a collection of elements that can be operated on in parallel. There are three presentations: row matrix, where each row is a local vector that can be stored on a single machine, row indices are meaningless; indexed row matrix, which is similar to row matrix, but the row indices are meaningful, that is, rows can be identified and joins can be executed; and coordinate matrix, which is used when a row cannot be stored on a single machine and the matrix is very sparse.

If you found this article helpful and would want to learn more about machine learning with Java, you can explore Machine Learning in Java – Second Edition. Written by Ashish Singh Bhatia and Bostijan Kaluza, Machine Learning in Java – Second Edition, will provide you with the techniques and tools you need to quickly gain insight from complex data.