A Human task, according to the (WS-HumanTask) Specification lets you model an activity that requires a human actor. When the process execution reaches at the user task node, a new task instance is created in the worklist of the actor(s) or group(s) defined for this task.

Human tasks can transition to several different states and involve stakeholders depending on the action taken on the task itself and the defined Roles.

Human Task roles define what a person or a group of actors can do with tasks. Following here is the list of roles for the human task activities:

Creating a Task from the jBPM Designer

Creating a jBPM Task from your designer is pretty simple as it’s available in the default palette. As you can see from the following picture, when you add a Task and enter in the Properties window you will be able to set key Task attributes such as: Task Name, Subject, Actors, Groups, Assignments / Reassignments/ Notifications, Priority, On Entry/On Exit actions:

In the above example, the Task has been assigned to the user “john”.

Task reassignment is a mechanism that lets you change its ownership by setting specific rules, which are based on the task state transition and a deadline time expression.

For example: “if John does not start the task in 60 seconds then reassign the task instance to Krisv”. The resulting reassignment rule syntax is : 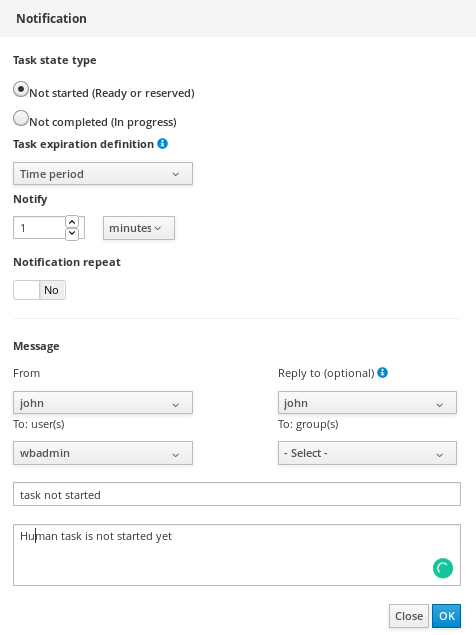 In the above example, If the human task is not started with in 1 min of process start then a notification email would be triggered.

Alternatively, the user can release the task, bringing it back to the Ready state. No transition is allowed from the Complete state and the Failed state.

the org.jbpm.services.api.UserTaskService API covers complete life cycle of individual task so it can be managed from start to end. The following example shows how to interact with the UserTaskService to get the list of Tasks assigned to the user “john”, that will be claimed, started and finally completed passing as input a list of parameters: